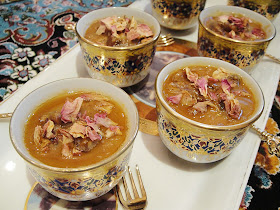 This month's MENA Cooking Club feature is Qatar, which couldn't have come at a better time because 'tis the season of fresh dates! Fresh dates mean Rangina making, pronto. The MENA Cooking Club explores the differences and similarities of the Middle East and North African countries through local cuisine. Previous entries include Algeria, Bahrain, Djibouti, Egypt, Iraq, Jordan, Lebanon, Malta, Morocco, Oman, and Occupied Palestine.
Rangina (رنجينة) is a pitted fresh ripe date (Nature's toffee)sweet topped with a toasted flour and ghee mixture. Ripe fresh dates are crucial. The dates are sweet enough, so they don't need added sweetness.
A few modern tweaks include the use of butter and some cinnamon. I diverge from the norm by using some olive oil instead of corn oil; I think it lends another layer of flavor. These rangina cups are a variation of my original post, and of the rangina balls posted not long ago. The host for this challenge is Carrie Rashid of Witchy Kitchen. 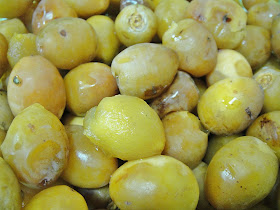 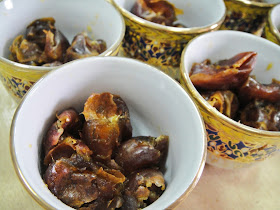 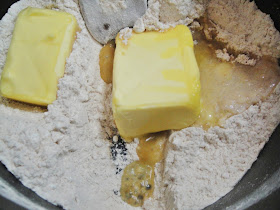 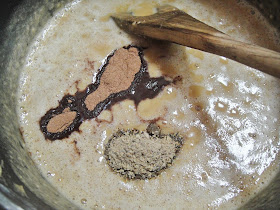 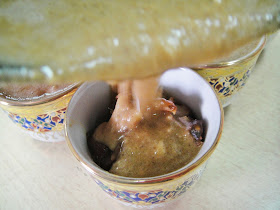 Keeping the whole dates intact, remove the seed and skin from the fresh dates.
Using Arabic coffee cups, arrange five dates per cup standing upright; set aside.
Over medium heat, toast the flour until it browns, tossing frequently to avoid burning.
Once browned, add the cinnamon, cardamom, and butter.
Toss until a paste-like mixture is formed.
Stir in the olive oil until a smooth pourable mixture is formed.
Pour the hot mixture over the tidied dates, and let cool to room temperature before serving.
Sprinkle with edible dried rose petals or nuts to decorate. 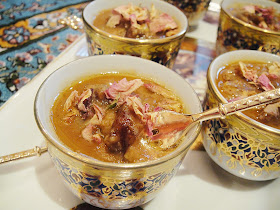