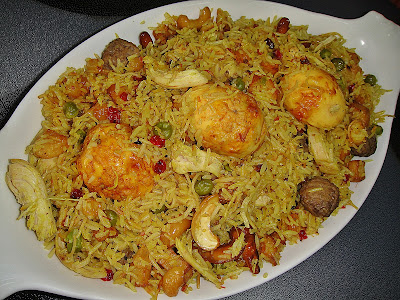 Launching a culinary investigation of the origin of biryani rice, one would discover that biryani rice originated in Arab countries, migrated to India where it was added to and modified, then journeyed back to the Arabian Gulf as it is known today as the spicy and fiery biryani. Iraqi biryani (تمن برياني عراقي) is closer to the original version than the present-day Arabian Gulf biryani.
Iraqi biryani was specifically requested by a dear reader, and I thank her for that.
It is not difficult to make at all. But it is a multi-stage and a potentially lengthy recipe.
Obviously, biryanis of various breeds exist: vegetarian, chicken, lamb, or fish.
This biryani is a family recipe and includes both shredded chicken and lamb meatballs (named sparrow's head-راس عصفور). 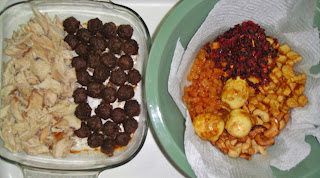 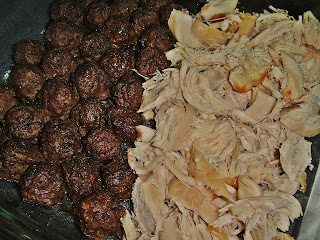 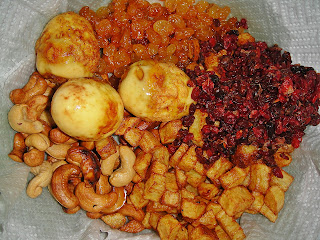 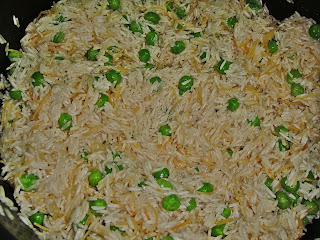 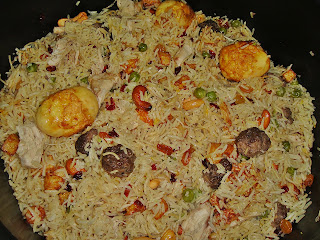 Boil or roast the chicken (I roast it in the oven for 30 to 40 minutes at 400F).
Shred the chicken; set aside
Form the minced meat into smallish meatballs (I got 30 meatballs from 500g of mince).
Place the meatballs in an oven-safe dish, sprinkle with salt, pepper, the curry powder, and the chili.
Bake the meatballs for about 30 minutes at 400F. (I bake the meatballs and the chicken at the same time.)
Set aside.
Boil the eggs until hard. Peel then fry whole until golden; set aside.
Fry the cashews and almonds until golden (be careful it burns fast!); set aside.
Fry the sultanas until puffy (optional, but the carmelization flavor is nice); set aside.
Rinse the barberries from any grit in several changes of water. Allow to drain in a sieve until dry; set aside.
Peel and cube the potatoes. Fry until golden and tender; season; set aside.
Chop the onions and saute in a pot with the ghee until tender.
Add the vermicelli and the peas, saute until peas have thawed.
Stir in the rice, salt, and rosewater,
Add boiled water jut to cover the rice by a finger's width.
Return to boil, cover, reduce heat to low, simmer 20 minutes.
Delicately stir into the rice the meatballs, shredded chicken, eggs, nuts, sultanas, barberries, and potato.
Serve hot. 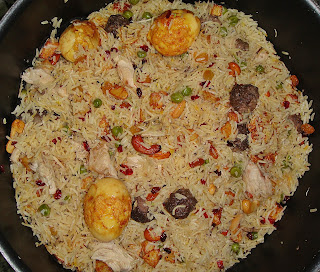 Bravo Maryam. Are the potatoes boiled before peeling, cutting and frying?

Merci!
No the potatoes are not boiled, they are fried while still raw. By the time they get golden, they will be cooked through due to their size (about one centimeter cubed).

Google or Wikipedia it.

Very informative and inspiring post have been posted here. I bookmarked this blog further more information about new indian recipes.last weekend i visit a Indian restaurant for dinner. it was awesome experience of biryani taste. I never forget it's taste.I am going to cook it at home with the help of your recipe.

I hope you like it! It is multi-step but well worth the patience.

Thank you very specific instructions, my husband is Iraqi but I'm not, with this dish I will impress him

You're welcome, I hope it works out!

Very interesting to know that Biryani originated from the Middle-East! This version looks gorgeous!

Assalama alaikoum Maryam, I just want to say your blog is my absolute favourite. I was offline for almost a year and was really itching to know what you have been posting. God bless you for sharing all these yummy recipes. Khadija

Wa alaikum al Salam ukhti Khadija; I've missed you here at MCW! I'm glad you're back and hope you've been doing well. Thank you for your kind words I really appreciate it. May Allah bless you and your family.