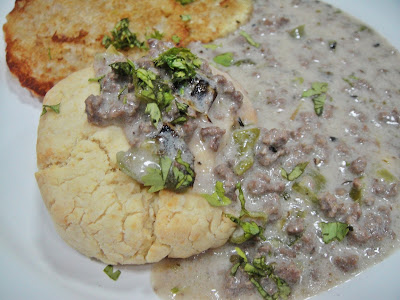 America, country of co-existing extremes, has a knack for culture-merging and creating hypes. The story of its biscuits and gravy is a rather touching one. Originally, it was created by mothers of poor families using cheap sausage and poured over the biscuits (something if a bread or savory cookie) to feed their families with some vague semblance of meat as meat was unaffordable.
It has now developed into a nostalgic dish craved and consumed by Americans of all financial statuses.
This particular version has a Mexican flare with the addition of roasted poblano peppers. If you can't find poblano, used green capsicum instead and add a bit more spice. 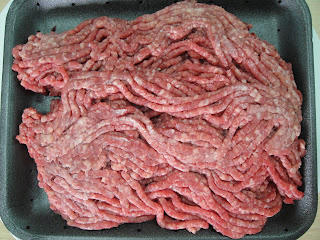 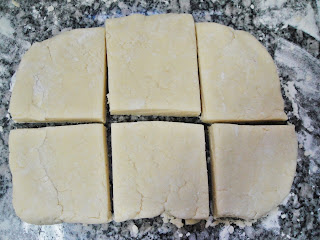 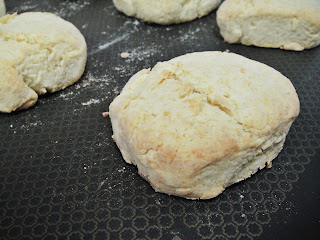 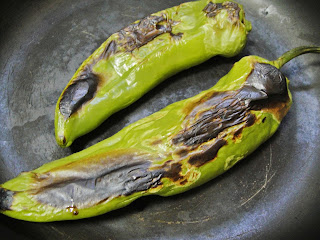 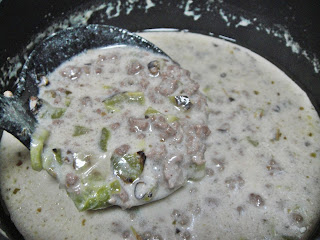 To make the biscuits, pulse all the biscuit ingredients except for the milk in a food processor.
Drizzle in the milk and pulse until a dough just starts to form.
Empty the dough onto the work surface and pat it into a rectangle about an inch thick.
Cut the rectangle into six squares, the push in the corners of each square to form circles.
Put the biscuits on a baking tray and chill for about an hour.
Bake the biscuits in a preheated 450F oven for 15 minutes. Set aside to cool.
To make the gravy, saute the minced meat in a large saucepan.
Stir in the salt, pepper, garlic powder, chili, and oregano.
Add the milk and chopped and seeded roasted poblano peppers.
Make a slurry with the cornstarch and a bit of water, then when the milk mixture is boiling, add the slurry and keep stirring until the gravy is of desired thickness.
Serve hot the biscuits on a plate with the gravy over and around it. 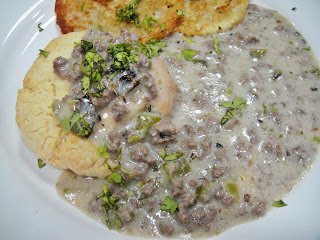 Email ThisBlogThis!Share to TwitterShare to FacebookShare to Pinterest
Labels: meat

I'm from the South which is where biscuits and gravy are from, we eat it almost daily and it will always be my absolute favorite.

I thought of you as I was making this! I see it's allure and it's amazing how childhood favorites stick way into adulthood.